Something Worth Doing by Jane Kirkpatrick

Abigail was warned by her mother.  Her lot would be hard.  And hard it was.  She was driven.  She would let nothing get in the way for the cause.  She fought hard and developed skills she didn't know she had.  But at a sacrifice.

This book was about the early years of the suffrage movement. It was quite interesting but sad in a way.  Abigail married and had a family.  But her focus and goal in life was getting the law passed so women could vote.

In her quest, she let her personal life pass by her.  She was fighting for women to have it all- equality.  But can we?  But her sacrifice was at a cost.  She took her loved ones for granted.  I believe that she put up a wall so she could continue her fight.  Did she have any regrets?

Abigail was an amazing woman.  She accomplished things that many could not even dream of doing.  I enjoyed reading about her journey and her development into the woman she became.

I received this book for free from Revell Books to review. 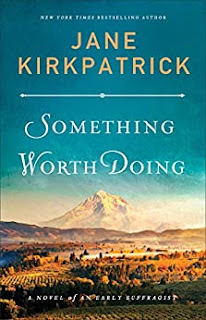 Jane is internationally recognized for her lively presentations and well-researched stories that encourage and inspire.

A New York Times Bestselling author, her works have appeared in more than 50 national publications including The Oregonian, Private Pilot and Daily Guideposts. With more than 1.5 million books in print, her 30 novels and non-fiction titles draw readers from all ages and genders. Most are historical novels based on the lives of actual historical women often about ordinary women who lived extraordinary lives. Her works have won numerous national awards including the WILLA Literary Award, the Carol Award, USABestBooks.com, Will Roger's Medallion Award and in 1996, her first novel, A Sweetness to the Soul, won the prestigious Wrangler Award from the Western Heritage and National Cowboy Museum. Her novels have also been finalists for the Spur Award, the Oregon Book Award, the Christy, Reader's Choice and the WILLA in both fiction and non-fiction. Several titles have been Literary Guild and Book of the Month choices and been on the bestsellers list for independent bookstores across the country, in the Pacific Northwest and the Christian Booksellers Association. Her books have been translated into German, Dutch, Finnish and Chinese.