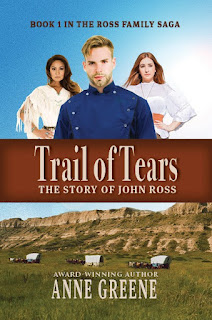 John couldn't believe his eyes.  How could this be happening?  He had to try to save them?  Was he too late?

Pretty powerful story that immediately took my breath away.  We all go through difficult times but I have never experienced anything similar to what John Ross did.  He  survived the ordeals set before him because of his faith.   His strength came from GOD.

This book is very powerful.  It isn't easy to read.  But it is important to read a fictionalized account of what happened in this time of history.

New International VersionHe replied, “Because you have so little faith. Truly I tell you, if you have faith as small as a mustard seed, you can say to this mountain, ‘Move from here to there,’ and it will move. Nothing will be impossible for you.”

I received this ebook  for free to review from Celebrate Lit.

Genre: Historical with some romance

One man fights overwhelming odds to survive and protect. Caught between the love of two beautiful women, which one will he choose?

What if you are a twenty-year-old about to attend college, and your whole world collapses? Your mother and sister are missing, and soldiers murder your father, burn your mansion, and take you prisoner.

Trail of Tears relives one of the most heartrending chapters in American history as the US Government transports the self-governing, wealthy Cherokee nation from their ancestral homeland to relocate in hostile Indian Territory.

The Georgia militia force John Ross, with only a trickle of Indian blood flowing in his veins, to walk the thousand-mile Trail of Tears.

After John protects a full-blood Indian girl from the lustful wagon master, the cruel soldier targets John for retribution—until John’s shoved too far.

Bitter animosity explodes from a jealous Army Captain as John pushes and pulls his Conestoga wagon over mountain roads made muddy by rain and slippery by snow. Yet the persuasive voices of the preacher and his daughter have an impact.

A new destiny awaits John at the end of the trail—if he survives. Four thousand Cherokee do not.

Anne’s home is in the quaint antiquing town of McKinney, Texas, just a few miles north of Dallas. Her husband is a retired Colonel, Army Special Forces. Her little gold and white Shih Tzu, Lily Valentine, shares her writing space, curled at her feet. She has four beautiful, talented children, and eight grandchildren who keep her on her toes and running.

Besides her first love, writing, she enjoys travel, art, reading, and way too many other things to mention. Life is good. Whether writing contemporary or historical, her books celebrate the abundant life.

Anne is a multi-award-winning author. This latest book, TRAIL OF TEARS, makes her thirtieth published book.

Anne loves writing about alpha heroes who aren’t afraid to fall on their knees in prayer, and about gutsy heroines. Her suspense novel, Shadow of the Dagger, is the first book in her CIA Series. Her Women of Courage series spotlights heroic women of World War II, first book, Angel with Steel Wings. Her Holly Garden Private Investigating series blasts off with Red is for Rookie. Enjoy her award-winning Scottish historical romances, Masquerade Marriage and Marriage by Arrangement. Anne hopes her stories transport you to awesome new worlds and touch your heart.

If you enjoy a short read, you’ll love her novellas: A Small Voice, Love At Christmas, Brides of The Wild West, A Crazy Optimist, Recipe For A Husband, Lacy and The Law, A Williamsburg Christmas, Her Reluctant Hero, Mystery At Dead Broke Ranch, Avoiding The Mistletoe, Lord Bentley Needs A Bride, Keara’s Escape, Daredevils, Spur of the Moment Bride, A Christmas Belle, A Texas Christmas Mystery, Texas Law, Hatteras Lighthouse Mystery, and A Time to Stand which will release in September.

Buy Anne’s books at https://www.amazon.com/Anne-Greene/e/B004ECUWMG. To learn more of Anne and to view her art and pictures of her extensive travel, visit her at www.facebook.com/AnneWGreeneAuthor. To view Anne’s books go to www.annegreeneauthor.com/anne-s-books.html. Join her newsletter for fun, events, and give-aways at www.AnneGreeneAuthor.com.

During our Fellowship Class one Sunday morning, a visiting missionary told the bare basics of the historic Trail of Tears, or Trail Where They Cried. I had lived, up to that time, all my life in the northern states, so I had never heard of what happened to the Cherokee Nation and those of mostly Caucasian blood who lived in Tennessee, North and South Carolina, Virginia, and Kentucky. The true story captivated me, and I felt this history needed to be told in a fascinating story context.

So, John Ross was born. For research, I travelled the Trail, though in far more comfort than the Conestoga wagons issued to the Cherokee men, women, children, and those with even small amounts of Cherokee blood. Under orders from President Andrew Jackson, the Georgia militia stripped the Nation of their land, their wealth, and their lives and transported them to hostile Indian land in the untamed Oklahoma Territory. At the time, the Cherokees were a civilized nation with a constitution, plantations, schools, and a newspaper. They considered themselves Americans.

The story sounds as if it might be sad … and there are tragic events portrayed, but my Trail of Tears is about hope, overcoming, and finding a new way of life. I think from the first page to the last, you will find Trail of Tears difficult to put down. It’s one of my favorite books!

For Him and My Family, September 25

The Meanderings of a Bookworm, October 2

To celebrate her tour, Anne is giving away the grand prize package of a $100 Amazon gift card and a copy of the book!!