She Who Knows No Fear by Barbara Bras

Cassie is a young woman who must learn that GOD is holding her in the palm of his hand.  As I read this book I felt that Cassie was spending way too much time worrying about what could happen than enjoying the gifts GOD gave her.

I got to a point that I was anticipating something bad was going to happen as though it was a self-fulfilling prophecy.  I was expecting what Cassie feared would happen.  Ugh!

This was a sequel but I had no difficulty following along and enjoying the book.

I loved the location- Hawaii.  Wouldn't it be lovely to live there?   I also loved the relationship Cassie developed with her stepmom. 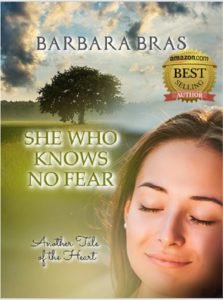 In 2015, Barbara Bras left her career to pursue her dream of serving God. She believed that her first step was to share the amazing story of God’s blessings in her life. Wrapped in God’s Grace, A Life Rediscovered does so through a trio of narratives. It begins with the story of her son’s miraculous adoption and the challenging years that followed, her grandparents’ remarkable survival in Armenia, and her own quest for purpose and love. Once written, Barbara realized her life’s new purpose. Captured by St. Paul in 2 Corinthians 1:3-4, she views her writing as a tribute to the God who comforts and strengthens us in hardships and trials, and as her mission to encourage others. Her first novel, She Who Knows, A Tale of the Heart, seeks to inspire and encourage. The sequel, She Who Knows No Fear:Another Tale of the Heart, released in December 2017. Solo Deo Gloria, To God Alone Be the Glory

All-of-a-kind Mom, April 26
proud to be an autism mom, April 26
Reflections From My Bookshelves, April 27
Inklings and notions, April 28
Blogging With Carol, April 28
Bibliophile Reviews, April 29
A Greater Yes, April 29
Josephine’s Thoughts, April 30
Among the Reads, April 30
Maureen’s Musings, May 1
Texas Book-aholic, May 1
Debbie’s Dusty Deliberations, May 2
Janices book reviews, May 2
Jeanette’s Thoughts, May 3
Reading is my Super Power, May 3 (Interview)
Reader’s Cozy Corner, May 4
Pause for Tales, May 4
Kaylee’s Kind Of Writes, May 5
Carpe Diem, May 5
A Baker’s Perspective, May 6
margaret kazmierczak, May 6 (Interview)
Mary Hake, May 7
Simple Harvest Reads, May 7 (Guest Post from Mindy Houng)
Two Points of Interest, May 8
Bigreadersite, May 8
For the love of books, May 9
Artistic Nobody, May 9 (Spotlight)

To celebrate her tour, Barbara is giving away a grand prize of a $50 Amazon gift card plus a signed copy of She Who Knows and She Who Knows No Fear!!
Click below to enter. Be sure to comment on this post before you enter to claim 9 extra entries! https://promosimple.com/ps/ca74
at May 02, 2018