The Loves of Mrs. McAllister by Hannah Mcniven 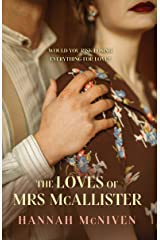 The loves of Mrs. McAllister are many.  It isn't just the love between a man and a woman.  Esther McAllister loved her mother and the village she lived in very much.  This love was the basis of many of the decisions she made in her life.

Esther was stronger than she thought.  She was smart and worked hard to achieve the impossible.

Many of her loves were forbidden.  How can she live with the decisions she made?  What would happen if her secrets were discovered?

I enjoyed the book.  It was different than anything I have read lately.  Beware: there were some sexual scenes that might make you uncomfortable.  I do give it five stars out of five.

I received an advance review copy for free, and I am leaving this review voluntarily.

Hannah grew up on a farm in rural Ireland where she spent her childhood riding horses and chasing or being chased by many other animals (mostly cows). Thanks to her parents and siblings, she became a voracious reader. From reading novels by the Bröntes to Evelyn Waugh to Phillipa Gregory, Sebastian Faulks and Pat Barker (there was plenty of Enid Blyton too), Hannah has developed a love of historical and literary fiction which has influenced her own writing. She has an especial interest in stories that occur around the time of, and during, World War One and Two. She sometimes feels that she was, perhaps, born in the wrong era but then remembers how useful the internet is when it comes to researching her work. She is also proud of her Scottish and Irish heritage, believing that there is nowhere more beautiful on Earth than the verdant hills and rugged countryside of these places which are the perfect setting for her work.