One night and I finished it!  I couldn't put it down.  Will Evelyn fulfill her dream?  Will Jasper get his wish? 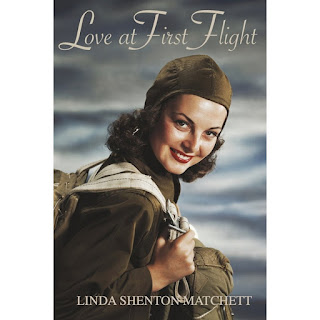 I enjoyed reading about WWII and the part the women played in fighting this war.  They not only were fighting the enemies but had to prove their worth.  Not all the women stayed at home on the home front.  Evelyn was an example of the women who joined the Women's Auxiliary Ferrying Squadron. I never heard of this group of women.  It sure sounded dangerous.  I can imagine that the men in their lives frowned upon them doing this.

Evelyn dreamed of flying planes.  She would do anything to see this come true.  But was it worth what she gave up? Jasper couldn't forget the last time he saw Evelyn. They are brought together after not seeing each other so many years ago.  Was this GOD's plan?  Was this their chance of rekindling what they lost?

I thoroughly enjoyed the book. Evelyn was determined and not looking for romance.  It was a joy to read a character who was intelligent and beautiful.  Jasper was intelligent, kind and handsome.  They could be a perfect couple.

I received this for free to review from Celebrate Lit.

Can two people emerge from the clouds of past hurt to find a silver lining of love?

Evelyn Reid would rather fly than do anything else, so when war engulfs the U.S., she joins the Women’s Auxiliary Ferrying Squadron. One of the program’s top pilots, she is tapped for pursuit plane training…the dream of a lifetime until she discovers the instructor is her ex-fiancé, Jasper MacPherson.

Collecting enough points to rotate stateside, fighter pilot Jasper MacPherson is assigned to teach the WAFS how to fly the army way. Bad enough to be training women, but things take a turn for the worse when his former fiancée shows up as one of his students.

Linda Shenton Matchett writes about ordinary people who did extraordinary things in days gone by. She is a native of Baltimore, Maryland and was born a stone’s throw from Fort McHenry. Linda has lived in historic places all her life, and is now located in central New Hampshire where her favorite activities include serving as a volunteer docent and archivist for the Wright Museum of WWII, exploring historic sites, and immersing herself in the imaginary worlds created by other authors.

It’s all I can do to parallel park my car…well, actually I can’t. I’m terrible at that sort of thing, which is why I’m so impressed with the Women’s Air Service Pilot who served during World War II. Created in August 1943 by merging the Women’s Flying Training Detachment and the Women’s Auxiliary Ferrying Squadron, the WASP was a civilian organization that came under the authority of the Air Force and freed male pilots for combat or other duties. Their leader was the intrepid Jacqueline Cochran, an award winning pilot who set and broke numerous records during her career.

Qualifications for the program were stringent, and of the more than 25,000 women who applied, only 1,800 were accepted. Of that number, 1,074 completed the program. These women flew over sixty million miles and transported every type of military aircraft from the ninety-nine foot long B-29 Bomber that weighted over 100,000 pounds to the P-51 Mustang that could fly at over 400 miles per hour.

The WASP also towed targets for live anti-aircraft gun practice, simulated strafing missions and transported cargo. Thirty-eight WASP members lost their lives and one disappeared while on a ferry mission, her fate still unknown. Disbanded in December 1944, the WASP did not receive military status or benefits for their service. However, after nearly three decades its members were granted veteran status, and in 2009 they were awarded the Congressional Gold Medal.

It is my hope that Love at First Flight honors these brave women in some small way.

For Him and My Family, March 31

She Lives To Read, April 1