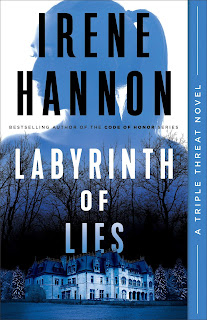 Undercover police work is dangerous. You have to be alert at all times.  You can never let your guard down.   Your life was at stake.  Cate knew the consequences of taking on this assignment.  But she wasn't prepared of the risks and complications of working with Zeke.

It's an interesting story with two criminal cases to be solved.  Was there a connection?

Cate and Zeke had a history.  Was there a future? Would Cate allow Zeke another chance?

It was sure was an exciting read.  A page turner.  I couldn't put it down.

I received this complimentary ebook to review from Revell Reads.

Be strong and courageous, do not be afraid or tremble at them, for the Lord your God is the one who goes with you. He will not fail you or forsake you.”

ABOUT THE AUTHOR
Irene Hannon
Irene Hannon is the bestselling author of more than sixty novels, including the long-running Hope Harbor series, as well as Labyrinth of Lies, Point of Danger and the Code of Honor, Private Justice, and Men of Valor suspense series, among others. Her books have been honored with three coveted RITA Awards from Romance Writers of America, and she is a member of that organization's elite Hall of Fame. Her many other awards include National Readers' Choice, Daphne du Maurier, Retailers' Choice, Booksellers' Best, Carol, and Reviewers' Choice from RT Book Reviews magazine, which also honored her with a Career Achievement Award for her entire body of work. In addition, she is a two-time Christy Award finalist. Learn more at www.irenehannon.com.
at October 09, 2021