A Dance In Donegal by Jennifer Deibel 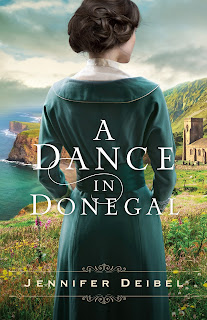 "THE TRANQUIL, SOOTHING POWER OF A SIMPLE CUP OF TEA ALWAYS TOOK MOIRA BY SURPRISE."

This line drew me right in and well, hello, Moira and Sean did, too!  I love books that are based in Great Britain.  England and I have a relationship going.  I love the history of the British Isles.  I can't get enough of the Royal Family.  My Mother was born there and I have visited at least 7 or 8 times.  I long to go and travel throughout Great Britain as I have ties to Scotland and Ireland.

This book was just lovely.  Moira's faith was tested over and over.  She knew GOD was by her side and she got her strength from that.  HE had a plan for Moira.

Sean was caring and very respectful to Moira.  He learned so much from his boss and friend, Colm.

Peg and Colm were a lovely couple that practiced what they preached.  They were just what Moira needed.  They were supportive and did not judge others.  There were others in their small community that believed the gossip about Moira and treated her poorly.  I was stunned by the behaviors of some of the ones that Moira counted as friends.

Can Moira find happiness in Donegal?  Is Sean part of her future?  Will she ever feel part of the community?  Will she get the answers to all her questions about her Mother?

I received this book for free from Revell to review.

Jennifer Deibel is a middle school teacher and freelance writer. Her work has appeared on (in)courage, on The Better Mom, in Missions Mosaic Magazine, and others. With firsthand immersive experience abroad, Jennifer writes stories that help redefine home through the lens of culture, history, and family. After nearly a decade of living in Ireland and Austria, she now lives in Arizona.

Debut novel, A Dance in Donegal, releases February 2, 2021 from Revell. Follow Moira Doherty to the wilds of rural Ireland in 1921. Available for preorder wherever books are sold.
at February 10, 2021

Madison was one tough cookie.  But her last case really got to her.  She couldn't forget how she felt.  The loss.  The sadness.   She is...