Lucie lived in Paris most of her life.  It was the place she called home.  She might have been born in America but she was loyal to her adopted country until she found herself in danger.  And then she had to make a decision.

Paul was an American businessman who was running a company in Paris.  Was he a German sympathizer?  Lucie struggled with her feelings for Paul.  She was confused.  Who was he?

A very intense story that is based in a historical period of time that we should never forget.  How could this really have happened?  It did.   Will Lucie and Paul survive?  Could they even have a future together?

This was a page turner.  I am always impressed by Sarah Sundin's research.   I enjoy her books.

I received this book from Revell Books to review. 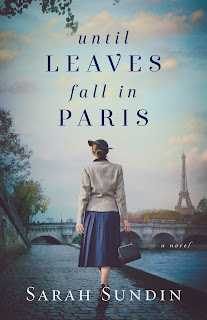 Sarah Sundin enjoys writing about the drama and romance of the World War II era. She is the bestselling author of Until Leaves Fall in Paris (February 2022), When Twilight Breaks (2021), (2020), the Sunrise at Normandy series, and three more WWII series. Her novels have received starred reviews from Publishers Weekly, Library Journal, and Booklist. When Twilight Breaks and The Land Beneath Us were Christy Award finalists, The Sky Above Us won the 2020 Carol Award, and both Through Waters Deep and When Tides Turn were named to Booklist's "101 Best Romance Novels of the Last 10 Years."

A mother of three, Sundin lives in California and teaches Sunday school and women's Bible studies. She enjoys speaking to community, church, and writers' groups. Sarah serves as Co-Director for the West Coast Christian Writers Conference.
at February 17, 2022